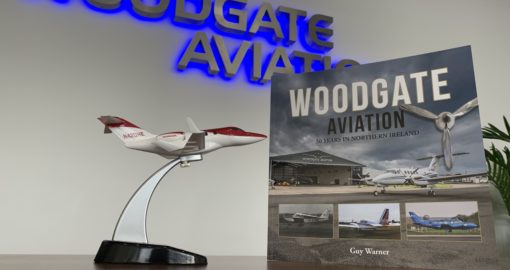 The story of the first 50 years of Woodgate Aviation and what lies ahead.

It’s ironic that the terrorist violence and destruction of the seventies boosted demand for air services at the fledgling Woodgate Aviation. So, too, did the economic boom generated by North Sea oil deliver real benefits for the eponymous company.  The story of founder Mike Woodgate, his wife Angela, and a small band of enthusiasts features in ‘Woodgate Aviation – 50 Years in Northern Ireland’ -’ written by respected aviation expert, Guy Warner. From very humble beginnings, Woodgate Aviation has survived and prospered where others failed and is now recognised and respected in the UK & Irish aviation marketplace.

Mike Woodgate, pictured below right, who earned his Private Pilot’s License when he was eighteen, was the first of only four Managing Directors to lead the company. Mike was followed by Allan & Gloria Keen and when they retired, their son, Johnny, took up the reins. 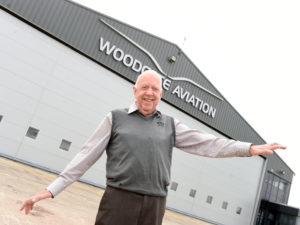 Woodgate Aviation started with a leased Piper Aztec and Piper Cherokee with the first revenue earning flight in May 1969 for a group of airport taxi drivers. The ‘Troubles’ in Northern Ireland saw many good enterprises put out of business, but not Woodgate.

Instead, Woodgate Aviation was in demand with reporters and camera crews seeking rapid transport. The commemorative book recounts how Mike felt “great sadness that overwhelmed him as he took a film crew, at night, over the burning houses of Belfast.”

Less depressing was how he transported on a regular basis a pair of greyhounds from Belfast to Shannon. Their owner sat beside him while the handler sat in the back with the dogs. Guy writes: “The dogs were always well behaved, lying down to sleep as soon as Mike started the engines and not waking until they were switched off.” Mike, not being a betting man, didn’t have a flutter, and never made anything extra from the trips.

Steady growth was maintained, to the point where within a few short years from start-up, Woodgate Aviation was employing six full-time pilots and felt it could invest a staggering £174,000 in its first Piper Chieftain. This beauty, of it’s time, could accommodate nine passengers, cruise at over 200 mph with a range of 800 miles.

The recollections of former Belfast based Thomas Cook Captain, Con Law who started as a plane spotter at the age of twelve and through a bit of good fortune was taken under the wing (pun intended!) of flying instructor Bill Potter. Good and not-so-good events are vividly chronicled.

There were the terrorist attacks on the former BA Staff Canteen and Cargo building along with the Skyways Bar and Restaurant located on the site of what today is the Maldron Hotel at Belfast International Airport. The BA facility was re-built but within days it was burned to the ground after “someone left a chip pan on a lit gas cooker hob!”

Then came the bonanza for Woodgate Aviation from the oil boom in the North Sea. Woodgate came to the rescue when two executives from JMJ Contractors missed a flight to Scotland to pitch for a crucial contract. Woodgate got them there. JMJ won the contract and that opened the way for “a huge volume of work for Woodgate ferrying workers (building contractors, electrical engineers, plant maintenance men and executives), equipment and spare parts, firstly to Orkney, then Aberdeen and the Shetland Islands.”

The company continued to prosper with varied, diverse and sometimes challenging cargo. Take the 500, day-old chicks that broke free during a bumpy flight and invaded the cockpit, the burly passenger who had an epileptic attack at 10,000 feet and not forgetting TT riders for the Isle of Man  and  equestrian enthusiasts bound for the Badminton Horse Trials. Then there was the infamous car manufacturer, John DeLorean, who had a factory in Belfast during the late 1970’s, who would have a tarmac transfer to and from Concorde at Heathrow Airport when travelling to and from New York.

By 1980, Woodgate had eleven aircraft and twelve pilots and was one of the first general aviation companies to employ female pilots.

Allan Keen, his wife, Gloria, and son, Johnny, had aviation in their DNA. Allan, an intrepid and accomplished aviator, was once asked by the late Chief Pilot at Shorts Bros Belfast (now Bombardier), Allan Deacon, to work as co-pilot delivering their 360 models to the USA and China. Allan’s entrepreneurial talents were always in evidence both in the Isle of Man and Northern Ireland.

Johnny followed in his father’s footsteps. At sixteen, he began flight training at Isle of Man Airport, Ronaldsway and flew solo on his seventeenth birthday. Not just that, but he also inherited the flair for business.

In 1990, with Allan at the helm, the business model was changing with the lucrative corporate and business aviation sector assuming greater importance. In fact, in 1991, Woodgate Aviation carried a record 2,900 passengers which was up almost a third on the previous year.

Johnny gained a full commercial licence and, at twenty-three, became the youngest person in the UK to earn a CAA Examiner qualification. Not surprisingly, father and son have a wealth of aviation stories to tell about those heady days including their decision to buy two Britten Norman Trislanders in Africa, and ferry them back to the UK.

Adaptation, innovation, diversification and investment in aircraft along with facilities are all here in this great 63-page read. There was the decision to add King Air B200 turboprop aircraft to the ‘stable’ and the success in securing contracts for the management of private jets and the operation of fixed-wing Air Ambulance services from the Isle of Man and Northern Ireland to mainland UK.

David Shaw joined the team in 2005 and nine years later he was appointed Accountable Manager with Johnny succeeding Allan as Managing Director in 2009. One King Air became two, with both the capability of Medevac or VIP configuration for private charters.

Last year, Woodgate transported hundreds of patients out of Northern Ireland, its busiest year since the start of the Air Ambulance service eleven years ago. In that time, 2,500 patients have used the service.

A new purpose-built, state-of-the-art hangar and Private Jet Departure Terminal was opened at Belfast International Airport in 2016 – a facility that offers luxurious surroundings for high net-worth clients either using their private jets hangared there or charter services operated or handled by the company. At the same time, the hangar at Ronaldsway was upgraded.

As to the future, Woodgate Aviation is planning to double in size to allow more room not only for maintenance but also secure hangarage for visiting and managed business jets. Keith McKay, Woodgate’s Operation / Business Development Manager, is rightly proud of the firm’s professional role during the hugely successful Open at Royal Portrush last year. He reports, that the company received very positive customer experience feedback from many of the players along with achieving its busiest ever day of VIP private jet handling with seventeen movements on the final day of the event.

More of the same is planned at Ireland’s longest established general aviation business.

It could have been so much different. In the early seventies Mike Woodgate needed an overdraft to expand. He asked for a limit of £2,000 from one bank and was turned down. A student who was learning to fly with him suggested he try another bank. This particular bank looked at the books and said to Mike: “How much do you want?” 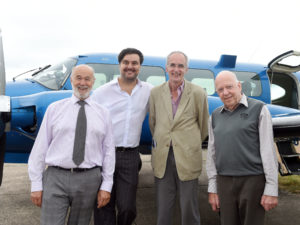 Copies of the book are being sold directly from Woodgate Aviation, priced at £9.99 including postage and a charitable donation. For Republic of Ireland or International book requests, additional shipping charges will be applicable.  To order a copy please email booksales@woodair.com  providing requested number of copies and a delivery address.  Payment will be accepted via Credit or Debit Card. 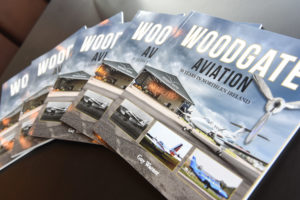